A Critical Step Toward
the Red Planet

In 2014, the National Academies released a report which concluded that NASA's current plans for getting humans to Mars could not happen earlier than 2046 without a massive (and unlikely) increase to the human spaceflight program's budget.

In response, The Planetary Society held a workshop in the Spring of 2015 to explore a proof-of-concept plan which could get humans near Mars over a decade sooner. This is known as orbit-first.

Instead of landing on the first go, NASA could lay out a series of missions that use existing programs, strategically build experience and capability, and spread out cost. The orbit-first concept would send astronauts near the Moon throughout the 2020s, to Mars orbit and Phobos in 2033, and finally to the surface of Mars by 2039 to begin an ongoing program of exploration. 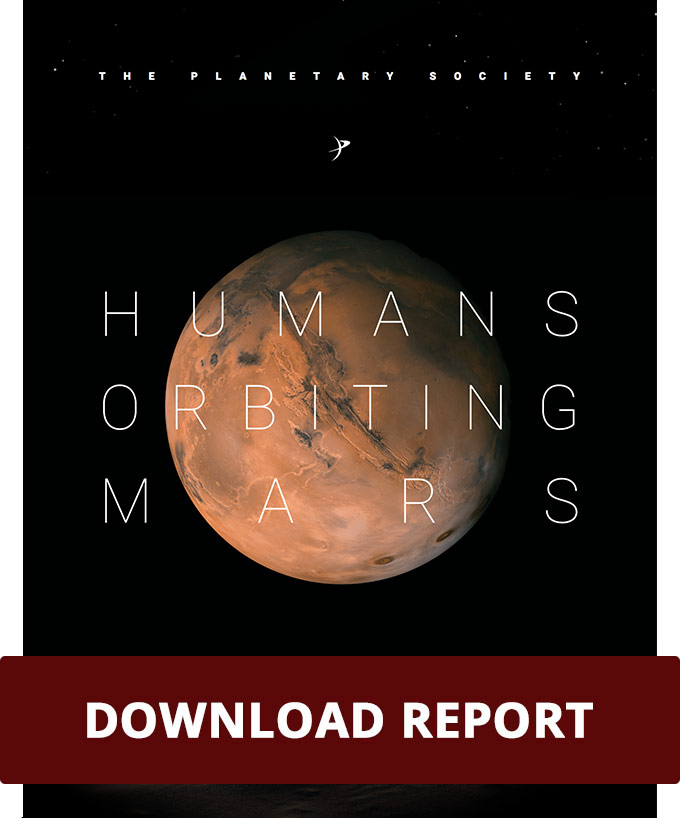 We've released a report—written for anyone to read— which highlights the major points of discussion from our workshop, and includes details on the orbit-first plan and its potential for science, public outreach, and affordability. You can download, read, and share it for free.

The Planetary Society held its workshop in Washington, D.C., from March 31st - April 1st of 2015. We invited nearly 80 participants from various NASA centers, the scientific community, academia, and government. Our goal was to faciliate a discussion about the future of human spaceflight at NASA—with a particular focus on a sustainable, affordable pathway to humans on Mars. Our program and agenda are posted online.

At the workshop's conclusion, the following items were proposed and discussed by the participants.

The Sense of the Workshop

The plan presented at the workshop for a long-term humans-to-Mars program that constrains costs by minimizing new developments was credible.

This plan includes, as an essential element, separating the human trip to the surface of Mars into two pieces. The critical initial element is a human mission to orbit Mars in 2033.

An orbital mission will enable scientific exploration of Mars and its moons while developing essential experience in human travel from Earth to the Mars system.

Such a program would fit within a budget that grows with inflation after NASA ends its lead role in the International Space Station.

Landing humans on Mars can affordably and logically follow later in the 2030s.

There will be both scientific and public support for this orbit-first approach.

Pursuing this orbit-first approach will establish a framework for involving the private sector and international partners, and will create a unified Mars science and exploration community.

The workshop report contains a lot of detail about the orbit-first approach. It also discusses the scientific potential of humans at Phobos and in Mars Orbit, debunks common myths about the costs of sending humans to Mars, and explores the role of the public, international partners, and commercial partners. It's a great place to start.

The proof-of-concept plan was presented by a study team from NASA's Jet Propulsion Laboratory in California. You can learn more about their Mars concept in this video presentation at the 2015 Humans to Mars Summit. There is also a peer-reviewed paper published in the NewSpace Journal and a detailed set of slides [pdf] presented to the NASA Advisory Council's Committee on Human Exploration and Operations.

Please accept marketing-cookies to listen to this podcast.

Interested in leveling up your knowledge on the issues and history of human spaceflight? Visit our Further Reading section for additional resources.

This is an exciting but uncertain time in space exploration. For the first time in decades, NASA is developing new hardware that can take humans into deep space. Commercial partners are providing access to low-Earth orbit.

But NASA's budget has shrunk while its commitments have grown. What can NASA do with this new capability?

The Planetary Society believes that Mars should be the goal for human spaceflight. NASA shares this belief. However, the 2014 National Academies report, Pathways to Exploration, stated that existing plans for getting humans to Mars are unaffordable under realistic budget projections.

The Planetary Society conducted this workshop and wrote this report in an effort to add a constructive voice to the conversation about the future of human spaceflight. The question we want to address: "is there a way to build a sustainable, executable, and affordable program to get humans to Mars?"

We believe that a long-term, focused, and step-wise approach to Mars exploration could provide the necessary framework to build a broad coalition needed to support this endeavor. Orbiting first is a practical solution to the problem of year-to-year affordability while still clearly advancing the humans-to-Mars goal.

We will use the results and information gathered at the workshop as a cornerstone in our efforts to positively impact the direction of NASA's human spaceflight program.

Do you like this idea? Hate it? Share your thoughts and comments—we want to hear from you as we advocate for a sustainable program of human space exploration. Just make sure to read our FAQ first.

We've already been getting feedback on the orbit-first concept from Planetary Society members. Here's some of what they've had to say:

The grand endeavor of sending humans to Mars will not happen overnight. It will take years of effort and support by a broad coalition dedicated to its success. Take the first step: join this coalition. Sign our petition in support of a sustainable, affordable, focused effort to send humans to Mars.

Signing this petition will help us keep in touch with you as we advance our Mars plans, and to let you know when you can jump into action when needed.

You can also help by spreading the word about this exciting mission! Encourage friends, family, and colleagues to join us in the adventure of space exploration and share this website on your favorite social media platform.